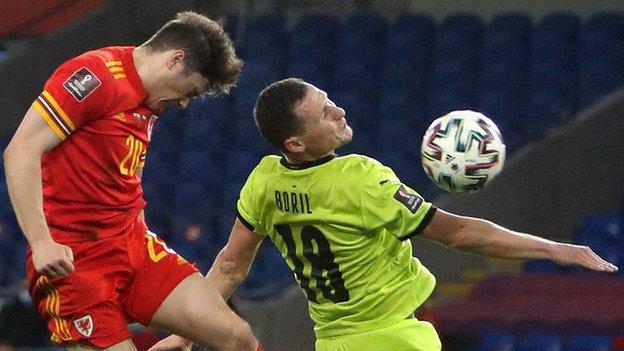 Daniel James' late header gave Wales a precious win over the Czech Republic in a fiery World Cup qualifier in which both teams had a man sent off.

The visitors dominated a goalless first half with Jakub Jankto missing several chances, while Gareth Bale wasted the best opportunity of all for Wales.

Czech striker Patrik Schick was shown a straight red card early in the second half for raising his hand to the face of Connor Roberts, who was later sent off for a second booking.

As both sides searched desperately for a winning goal, Bale delivered an inviting cross from the left wing, which James met with a brilliantly directed header to secure Wales' first win of the campaign.

The result moves Wales up to third place in Group E, one point behind the Czech Republic in second and four adrift of leaders Belgium, albeit having played one game fewer than both.

Despite only being Wales' second game of the campaign, this fixture already had a heightened sense of significance for both sides.

When the draw was made, Belgium were overwhelming favourites to top Group E and qualify automatically as the world's number one-ranked team.

As a result, Wales and the Czech Republic were expected to battle it out for second place and a play-off spot, though the visitors might have set their sights higher after drawing with Belgium on Saturday.

Wales may also have felt they could chance their arm for a shot at top spot because winning their Nations League group in November had already all-but guaranteed them a play-off place.

If they did have such lofty ambitions, Wales would have parked them during a first half in which they were overrun and outplayed.

The Czech Republic started purposefully, passing the ball confidently and pressing Wales into uncomfortable positions, forcing them to play long balls which came to nothing with their usual target Kieffer Moore on the bench.

With Wales unable to keep the ball in attack, the away side enjoyed as much as 75% possession and created three early chances for Jankto, who fired one shot at Danny Ward and another two narrowly wide.

Wales looked devoid of ideas, playing the kind of direct football Moore would relish - just without the Cardiff City striker on the pitch.

For all their struggles, however, it was the hosts who created the best chance of the first half.

Neco Williams curled in a fine cross from the left and Bale rose well to meet it, but volleyed his shot into the ground, allowing Tomas Vaclik to tip it over the bar.

Apart from that squandered opportunity, the Czech Republic were still well on top and, after Schick and Jankto both went close with another two chances, Wales were glad to go into the break level.

The complexion of the match changed early in the second half when Schick was shown a straight red card for raising his hand to the face of Roberts, who made the most of the contact with a theatrical dive.

Despite the red card, the Czech Republic were not content to hold on for a draw and replaced midfielder Tomas Holes with striker Michael Krmencik.

The visitors then came close once again to taking the lead, as Vladimir Darida's lofted pass over the Welsh defence freed Lukas Provod, who went past Ward, but was then thwarted by a brilliant covering tackle from James Lawrence.

The match was being played at a ferocious pace at this point and it took another twist when Roberts was shown a second yellow card after his elbow brushed Tomas Soucek while challenging for a header.

Although both teams were now down to 10 men, Wales had grown in confidence during their period with the extra player and they still felt the game was there for the taking.

Moore came on and gave their attack a focal point, and he slipped a fine pass to James, who rounded Vaclik, but saw his shot deflected wide by the Czech keeper.

Then with nine minutes left, the Manchester United winger found himself in the penalty area once more, this time at the end of a pinpoint Bale cross which he guided superbly into the net with a controlled header into the ground.

Wales' celebrations demonstrated the importance of the goal, but victory was not yet assured.

They had to navigate a few anxious moments in added time, none more so than a Czech corner which fell to Ondrej Celustka, whose shot was heroically blocked at point-blank range by Joe Rodon.

That proved to be the Czech Republic's final chance and, as the final whistle blew, the Welsh players' roars spoke of their relief and delight at securing what could prove to be a win of huge importance.