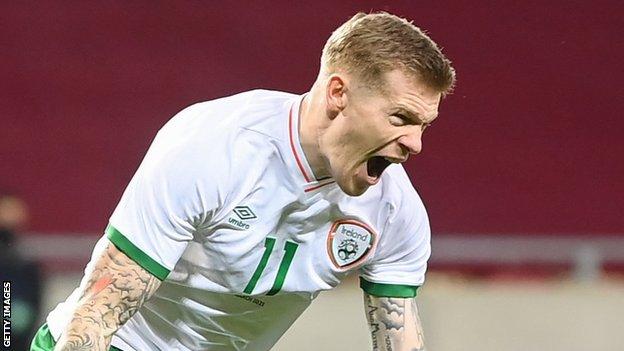 McClean's early strike was his first international goal since 2017

The Republic of Ireland failed to secure a first win under manager Stephen Kenny as they were held to a friendly draw with Qatar in Debrecen.

Mohammed Muntari levelled for the World Cup hosts with a well-struck shot early in the second half.

The non-competitive Group A game was originally scheduled to take place as the Republic's home match in Dublin, but the two teams agreed to reverse the order of their fixtures because of the Irish government's Covid-19 quarantine rules.

Kenny made eight changes to the side that started Saturday's shock defeat by Luxembourg with only Gavin Bazunu, captain Seamus Coleman and Dara O'Shea retained.

The Republic boss would have been delighted with their bright start as McClean drove them into a fourth-minute lead with his first goal since the 2018 World Cup qualifying win over Wales in October 2017.

The Qatari response was immediate with the World Cup hosts awarded a penalty after Bazunu's foul on Pedro Miguel, only for Hungarian referee Balazs Berke to change his decision to a free-kick after his assistant pointed out that the challenge took place outside the Irish penalty area.

Miguel was involved down the right flank once more in the 18th minute when he crossed for Almoez Ali, who should have tested Bazunu with his misdirected bullet header.

Shane Long, impressive on his return to the line-up, could have doubled the Republic's lead just before the half-hour mark when he latched on to a poor backpass, but failed to generate enough power in his shot to trouble Al Sheeb.

Qatar hit back in second half

While there were plenty of positives for the Republic to draw from the opening 45 minutes, the second half began in concerning fashion as Muntari drew Qatar level.

After being slipped in by Ali, Muntari swept his clinical equaliser low and to the right of Bazunu in a fashion not dissimilar to Gerson Rodrigues' goal for Luxembourg on Saturday.

Qatar could have taken the lead on the hour when Hassan Al Haidos drove through the Irish midfield before curling a shot straight into Bazunu's grasp.

Muntari then tried to catch the young Republic goalkeeper out at his near post but shot wide during a spell in which Kenny's side struggled to keep possession.

Having dictated much of the early play, the Republic looked flat in the second half, failed to fashion a clear-cut chance for a winner until the 88th minute when Robinson dragged his shot wide after Muntari had failed to add to his tally when he fired over from the edge of the penalty area.

Cullen came close to scoring a last-gasp winner for the Republic but the Anderlecht midfielder saw his header saved after a fine Cyrus Christie cross.

Kenny's start the worst by Irish boss in 50 years - the best of the statsStephen Kenny remains without a victory after 11 games in charge of the Republic of Ireland (D5 L6), the worst start by a manager with the Boys In Green since Mick Meagan, who failed to win any of his 12 games in charge between 1969 and 1971.Qatar are unbeaten in their last four games across all competitions, with this draw coming after victories over Bangladesh, Luxembourg and Azerbaijan. Prior to this, they had lost three and drawn one of their previous four.The Republic of Ireland have scored three goals in their last three games, one more than they managed in their previous nine.The Irish have shipped 10 goals in their last seven games, as many as they conceded in their previous 18.James McClean scored his first goal for Republic of Ireland since October 2017, against Wales in a World Cup qualifier, ending a run of 24 appearances without finding the back of the net for his country.James McClean's opener, scored on 3 minutes 22 seconds, was Ireland's quickest goal since Daryl Murphy netted after just 1 minute 46 seconds against Moldova in a World Cup qualifier on October 6th 2017.What's next?

The Republic must wait until September before they try to revive their World Cup hopes although Kenny will aim to secure a first win as manager in June during his team's nine-day camp in Spain, which will involve friendlies against Andorra and Hungary.