Trapping the light fantastic: a new-build home that confounds expectations

The planners insisted on a traditional house that sat politely with its neighbours on this tree-lined street in a conservation area of north London. But the design-minded owners of this expansive new-build, Afsaneh and Ebbi Farsian, had more ambitious ideas. They envisaged a modern, open-plan family home basking in natural light. The result? Not a tentative fudge of new and old, but a house that confounds expectations: traditional on the outside, and contemporary inside.

The eight-bedroom home, which was designed and built by Finkernagel Ross, an architectural and interior design company, replaced a lacklustre 19th-century building. 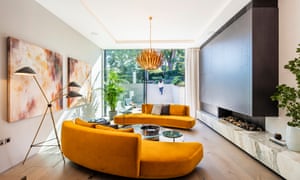